Ulitsa Lesnaja in Mosscow, via Valdonica in Bologna, Barron Road in Barnwell: Anna Politkovskaja, Marco Biagi, Fiona and Francesca Pilkington have lost their lives in these places, in the first ten years of the XXI century, that opened with the attack on the Twin Towers in New York. Not just simple spaces, but unforgettable witnesses of unfair deaths marred by intolerance. Donata Pizzi has looked them up and photographed them, together with many others, to remember the story that each brings along and to remind us that no place can escape from maybe becoming at some point the scenario for episodes of discrimination and abuse of power. 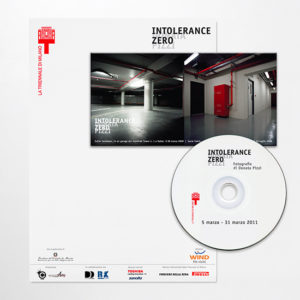 INTOLERANCE ZERO is born from this journey among spaces of the conscience. It is a photographic exhibition, programmed in TRIENNALE DI MILANO from 5 to 31 March 2011, promoted by Triennale, by the Robert F. Kennedy Foundation of Europe and Fondazione Doppia Difesa, with the patronage of the Presidency of the Council of Ministers – Minister for Equal Opportunities, the support of Wind, the generous organizational contribution of C-Zone and ComediArting and the technical support of Toshiba and Zanotta.

Even today we must fight to efendi what we thought we had definitely acquired: the right to a correct information, freedom of thought,the respect of  cultures and values different from our own, integration with handicapped or with ethnic, religious of gender minorities, tolerance in the vastest and complete implications.
For this reason Mara Carfagna, Minister for Equal Opportunities, Kerry Kennedy, honorary president of the Robert F. Kennedy Foundation (that fights for social justice and the respect of the fundamental rights), Giulia Bongiorno and Michelle Hunziker, envolved with Doppia Difesa in the safeguard of the rights of victims of violence and abuse, mainly women and children, join together to support the message of the Intolerance Zero exhibition.

Donata Pizzi’s photographs wish to introduce and provoke a reflection on the issue of intolerance through the stories of people who have died in the first decade of the XXI century because they forwarded an ideal of freedom and justice.

Men and Women like Hina Saleem; the Pakistani girl killed on August 11 2006 near Brescia, in her family home, by her father and other relatives for not accepting the Pakistani husband chosen by the family. Like  Father Anthony Kaiser, killed in Naivasha, in Kenya, for having denunce the government’s corruption and having defended the right to settlements of the weakest Kenyan tribes. Or like Eudy Simelane, captain of the Southafrican National soccer team, 25 years old, raped and killed in 2008 in a mass rieducational rape in the township of Kwa Tema, in Gauteng, in South Africa, where she was born and lived openly her homosexuality.

“These people who are dying bow, are very near to me, they are my contemporaries, and many are women, who live and fight in my owm times. I thought of giving testimony to their engagement by photographing the places where they were assassinated, to remember them above the crude news. All these places, very far from each other, but very near to the life of each of us (any road, an anonymous interior, a department store, a landscape) want to remind us of the inconsistency and diffusion today of a form of violence that takes us back to the Middle ages. It is my conviction that the images help us to not forget, to reflect, to keep alive the energy and the engagement of these generous and free persons, that have lived true lives”, comments Donata Pizzi.

INTOLERANCE ZERO wants to be the first stone of a wider project dedicated to sensitizing and educating on the issue of tolerance, through debates, events, meetings in schools, the institution of a dedicated day, an INTOLERANCE ZERO day, the spreading through the web and social networks. A work in progress that will nurture from the participation of web surfers, of studends, of journalists – of everybody who wishes to give their testimony.

THE MISTERY OF ART

THE TIP OF THE ICEBERG