THE DIVINE AND THE HUMAN 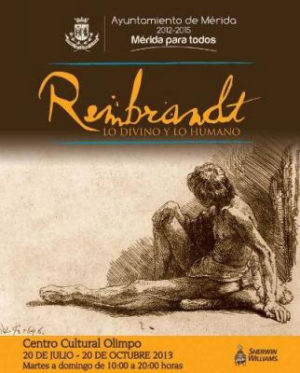 The series of 68 etchings by the renowned Dutch artist Rembrandt offering the chance to witness a selection of innovative works by a pivotal and influential figure in European art history and Dutch Golden Age painting.

The exhibition REMBRANDT: DE LO DIVINO E DE LO HUMANO (Rembrandt: the divine and the human) dedicated to the famous Dutch artist Rembrandt van Rjin (1606-1669) consisting in original works in etching, engraving and more made between 1630 and 1665.

After the big exhibition for the first time in Mexico organized by Erytrea at the Centro Cultural Olimpo of Mérida, the masterpieces cameback to Spain.

The collection host in Valladolid shows almost 70 works divided into three parts, the artist’s life with portraits and nudes where Rembrandt aims to show the human condition in all its aspects, free sex, who tries to ennoble and crafts, especially the craftsman and, finally, the religious theme, which is located in the third room of the exhibiton Space, with two master pieces: the Old and New Testament, where the figures of Abraham and Isaac are very representative of the experience of the painter himself.

The exhibition welcomed in Valladolid after Barcellona, Chile and Mexico across the 2011, 2012, 2013 has already been lodged in international museums and foundations in Italy, Spain and Andorra, with unbelievable succes due the reason it offers a full path in the work of Rembrandt, which allows you to appreciate his studies of nudes, light and composition of the reality and simultaneously; the concept of mortality in man charged with deep religious feeling.

In the work of this great painter and engraver, the undisputed star is the light, which determines the dynamic structure of images revealing. In his vast studies, have an important role in the engravings produced from 1626: portraits and self portraits, religious subjects, mythological and landscapes among the others. Rembrandt is something like an investigator, learns the art very early, and through it expresses the freedom he need as a creator.

Spanning from 1630 to 1659, the works included in the exhibition are representative of Rembrandt’s various themes and artistic techniques. A biblical element runs throughout the collection, a feature for which he is arguably most well-known, along with more personal works such as “Rembrandt’s Mother, her hand resting upon her breast”.

The 68 original works are an example of excellent technique, and material composition and both its ability to capture the lights and shadows of the tangible world and at the same time of the human soul including his own.

PICASSO AND HIS PASSIONS

THE LEGEND OF ART