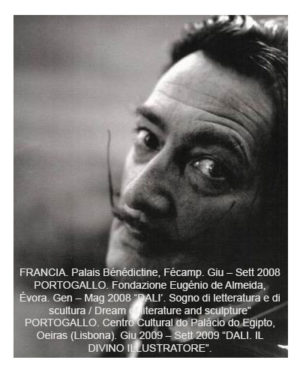 The exhibition emphasizes Dalí as an illustrator, showing the Spanish artist’s works inspired by the Divine Comedy.

As the curator Stefano Cecchetto tells the complete series is made of 33 tryptichs, each one consisting in three boards referring first to the Paradise then to the Purgatory and then to Hell, respecting the path articulation according to the divine number made by Dante himself.

This series represents Dalí’s art at its best encompassing all the various aspects of his style’s research: from the “limp esthetic” to the interest for the classic myths, from the study of Michelangelo’ figures building structure to the passion for the circular engravings as well as the use of colors.

Through this works the audience witnesses a real anthology of the great Catalan master’s styles and techniques along with his idea of painting, finding the highest evidence of his dream-like vision of reality in these illustrations.

DALÍ. DREAM OF LITERATURE AND SCULPTURE.

The retrospective, which inaugurated the new Cultural Centre in Oeiras (Lisobona), dedicated to Salvador Dalí’s great work has focused on graphic art, closely related to the painting and to the relationship between literature and the arts.

We find in this way all reflections of the literary tradition as “The conquest of the Holy Grail” or “The Ages of Man” in the purest style of the medieval imagination, the stories and fairy tales as “Alice in Wonderland”, “Gargantua and Pantagruel “,” Triglav “and” Pater Noster “.

The sculptures that enrich this exhibition are of monumental dimensions, medium and small, they are even more symbolic of the imaginary world of Dalí. Their strength is a transgression of a creative vision of the world, which has its starting point in surrealism as “Cosmic Dragon Elephant Swan” and takes us to the more traditional and contemplative space balance with reality with the vision of the muse “Gala in the window “.

A return to the religious world is represented by “San Carlo Borromeo and Christ” in addition to the myths known as “Divinity at Dauphin. ” This is a great exhibition of Dalí’s poetic and at the same time a fascinating journey into the imaginative literature.

A JOURNEY IN ART