A JOURNEY IN ART

ExhibAir is “the place – not” created (concept, project and organization) by ComediArting place in the Airport of Milano Malpensa, which encompasses both: an original language, a multipurpose space, an innovative way to make art. 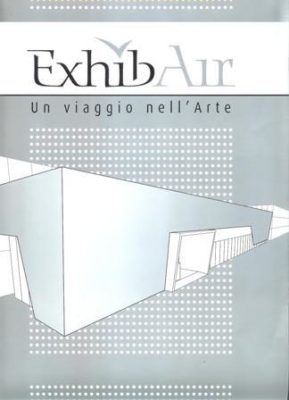 ExhibAir is a journey in art created by ComediArting, sponsored by Sea – Milan Airports in partnership with Toshiba Computer Systems, and with the support of URMET technique Zanotta.

The innovative cultural initiative, was a mental flight established with the aim of a space dedicated to art in an international airport. Within a special purpose-built architecture in the ticket aerea of Milan Malpensa Airport, proposed in a review with three exhibitions, that were free entrance and open to all passengers at Terminal 1.

It was inaugurated with the Picasso exhibition, La Demoiselle d’Avignon di Milano, La Femme Nue from The Civiche Raccolte Museum in Milan.

The last show was Electronic Lounge – The Halevim Donation to the ’900 Museum in Milan. The videoart exhibition consists of video works and a sound installations by Italian artists as Cuoghi, Grimaldi, Roccasalva, Tuttofuoco, joined by the well known American artist Anna Gaskell, thus broadening the perspective into an international context.

Visitors and travelers were involved in image suggestions and sound solicitationsand through an interactive space they were led towards the artists’ emotions. A mental flight, an unexpected moment.