Thanks to the Sota Company, ComediArting was called to collaborate with the project “Art at Colombo” in Lisbon, the temporary museum held in Colombo Central Quarter’s square.

The initiative “Arte Colombo” was launched in 2011 and presented in collaboration with the Berardo Collection Museum in the exhibition of works by four national artists – Joana Vasconcelos, Miguel Palma, Susana Anágua and Isaac Pinheiro. Following the National Museum of Ancient Art (2012), the “Andy Warhol Icons” exhibition (2013), the interactive installation “The Pool” by North American artist Jen Lewin (2014) “The Divine Comedy of Salvador Dalí” 2015), the photo exhibition Terry O’Neill – “Star Faces” and last year, and the photo show of Frida Kahlo.

The Roy Lichtenstein exhibiton is current on show.

Our exhibitions and collections for the Art at Colombo project, shows by authors;

ANDY WARHOL. The exhibition “Andy Warhol – Icons, Psaier and the Factory Artworks” was thought of, designed and produced by State of the Art for Sonae Sierra.
The show included original artworks by Andy Warhol (1928-1987), one of the most important artists of Pop Ar

t, inspired within the “Factory”, the artist’s studio. The exhibition structure was made of 1.500 metal cans and located on the central square of the shopping mall “Colombo”, an unprecedented project by the studio LIKEarchitects.

Besides famous works, such as The Campbell’s Soup and portraits of Marilyn Monroe, the exhibition presents works signed by Pietro Psaier, a mysterious artist, of whom only few traces remain. (Images © Fernando Guerra FG+SG) 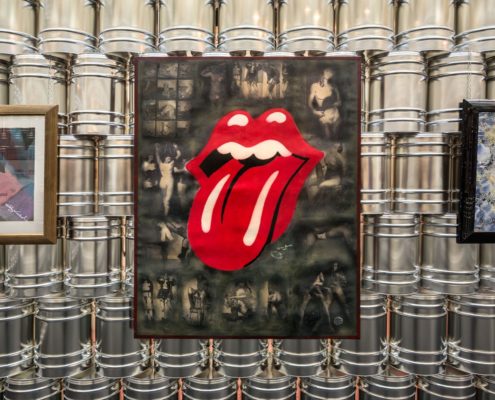 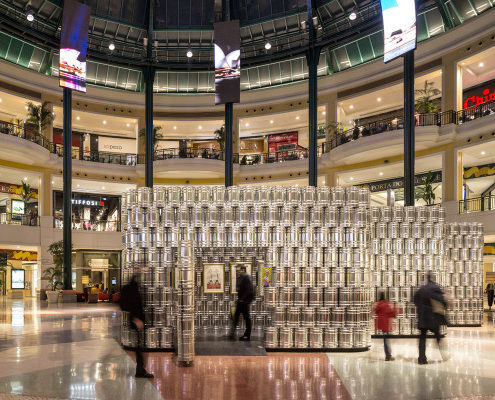 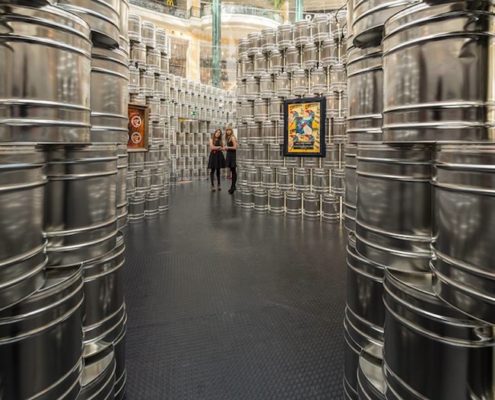 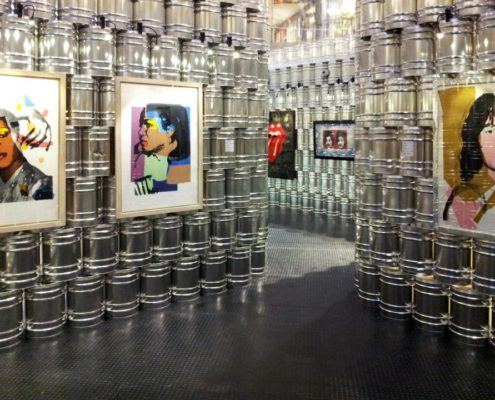 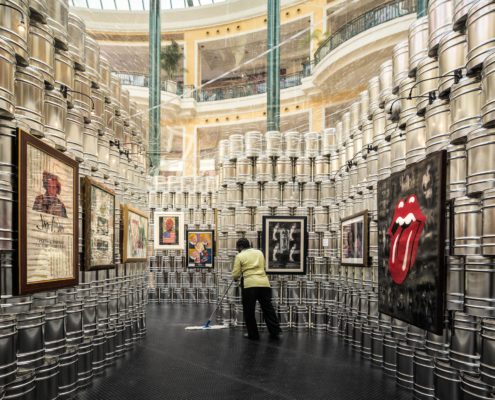 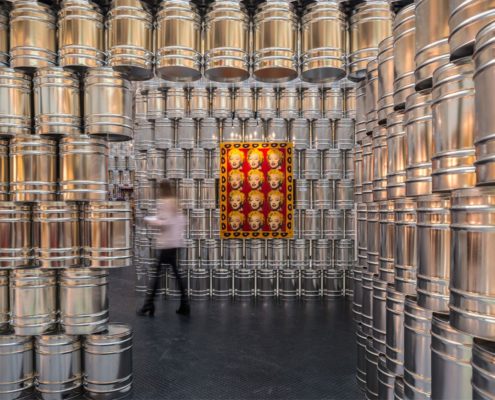 SALVADOR DALI. Marking the 5th edition of the project “Art at Colombo”, the museum space of the exhibition was divided into nine interrelated rooms, allowing the multiplication of possible exhibition routes. In the year that marked the 750th anniversary of the birth of Dante Alighieri, an exhibition of one hundred original engravings of Salvador Dalí, illustrating Dante’s travels through Hell, Purgatory and Paradise.

The exhibition was on show on Colombo`s central square from June 17 to September 20, 2015. (© Fernando Guerra) 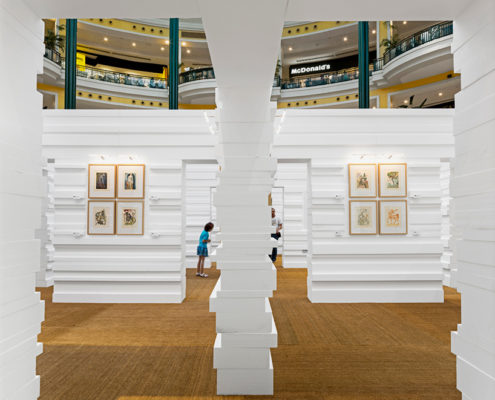 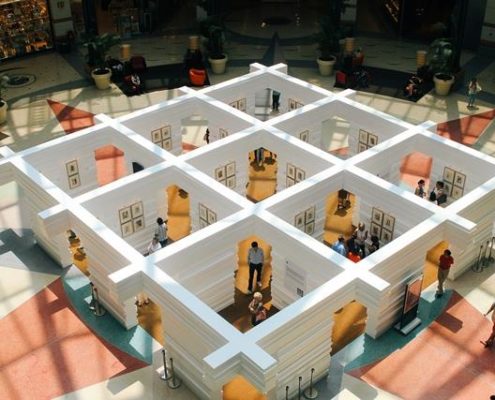 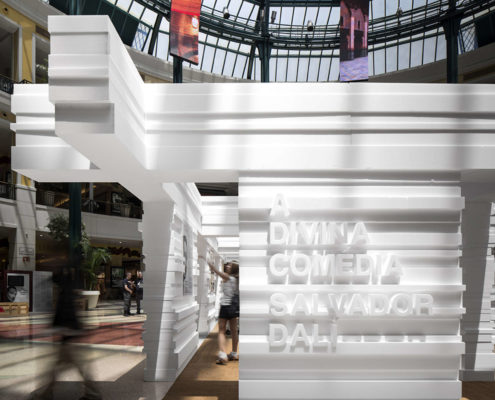 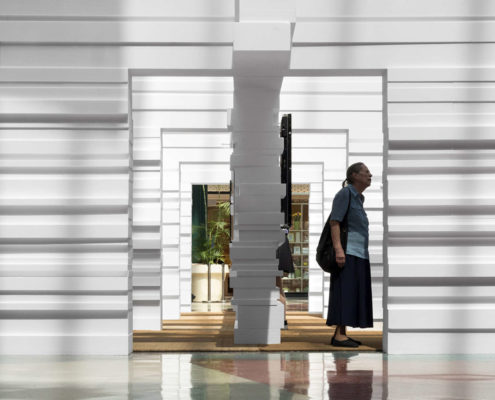 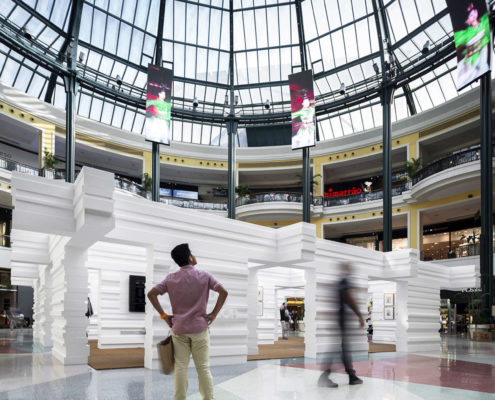 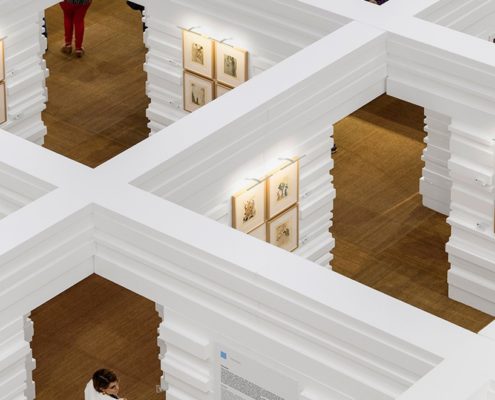 FRIDA KAHLO. Set in an Exhibition Pavillion created from 4000 meters of yellow wire, the exhibition included also videos of contemporary models in super slow-motion. ComediArting brought original photographs of Frida Kahlo taken by some of the leading photographers of the 20th century, such as Nickolas Muray, Edward Weston and Imogen Cunningham.

The exhibition, for the first time in Portugal, brought together 71 original photographs of this world-renowned artist. 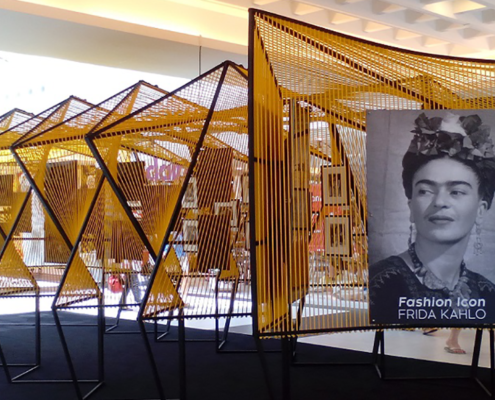 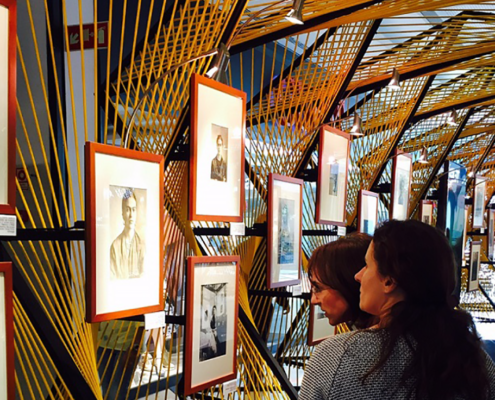 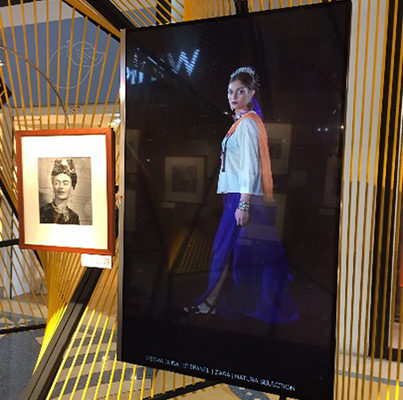 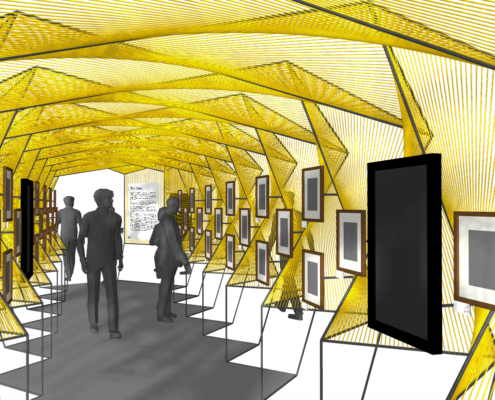 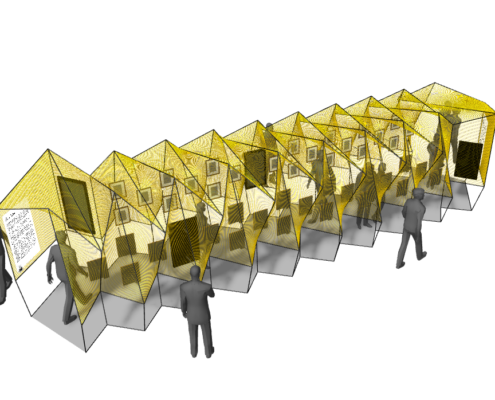 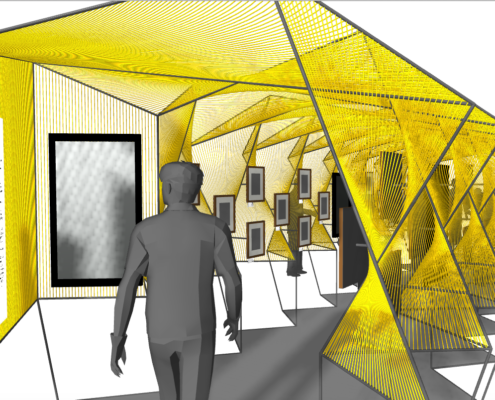 TERRY O’NEIL. The exhibition “Terry O’Neill. Faces of the Stars” at Colombo Center, presented 50 of the most famous works by legendary British photographer Terry O’Neill, who from the early ‘60s has been dedicating his career capturing with his camera the most famous personalities of their time, converting them into icons.

The Curator Cristina Carrillo de Albornoz Fisac was invited to include a selection of O’Neill’s most renowned shots of actors, singers and models such as Sean Connery, the Beatles, Frank Sinatra, Elton John and Faye Dunaway, his future wife, the morning after winning her Oscar for Network. Spontaneous private moments often captured because of his personal relationship with the stars, make these images iconic and intimate at the same time.

The exhibition organized for Sonae Sierra counted with the institutional support of Fundação D. Luis I., the British Embassy, the British Council and was part of the official program of the Portuguese Year of Cinema and Audiovisual. The exhibition received more than 184.500 visitors in three month. (Images ©  Valter Vinagre) 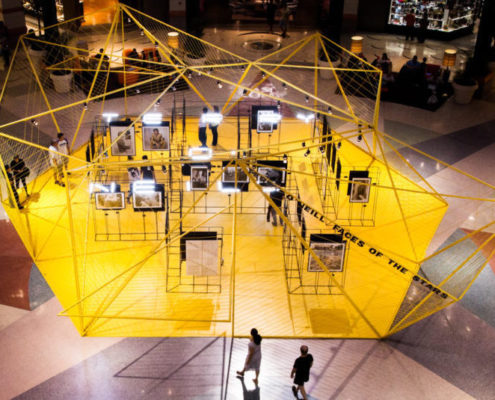 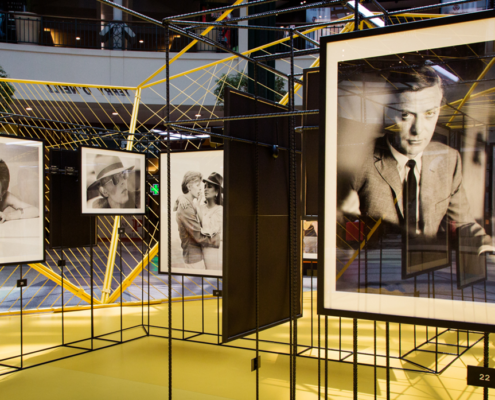 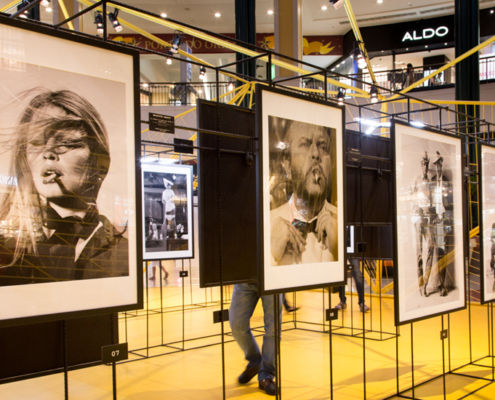 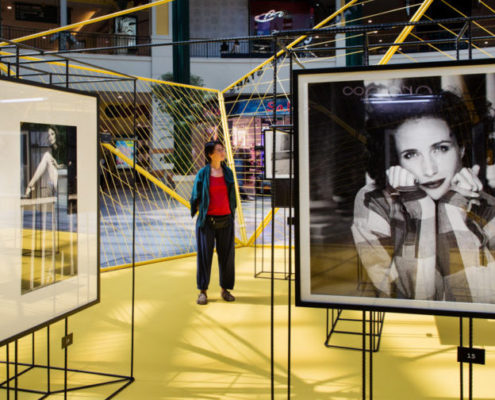 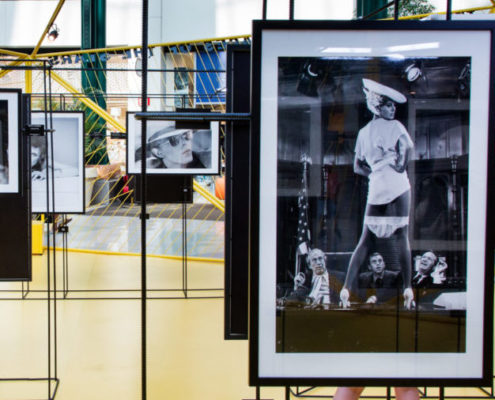 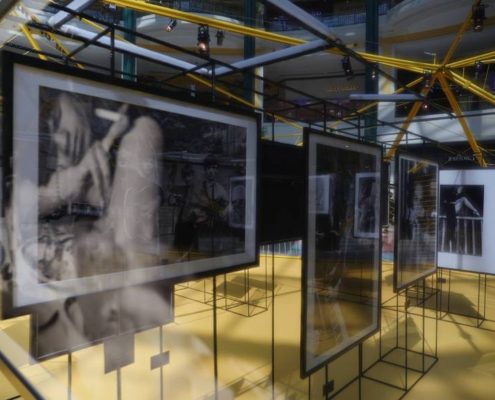 ROY LICHTENSTEIN. “Roy Lichtenstein and Pop Art” is the title of the new exhibition presented in the 8th edition of the “The Art Arrived in Colombo” project, officially opened now and can be visited by the public from this time .

The work of Roy Lichtenstein (1923-1997) will be displayed in four chronologically organized sections: “Pop”, “Landscapes”, “Homages” and “Posters”. One of the creators of the Pop Art movement, Roy Lichtenstein, transformed images of popular culture and masses from advertisements, series and everyday life. “Crying Girl”, “Whaam!” and “When I opened fire” are some of the most emblematic pieces on the artist’s estate, as seen in September at the Colombo Shopping Center. 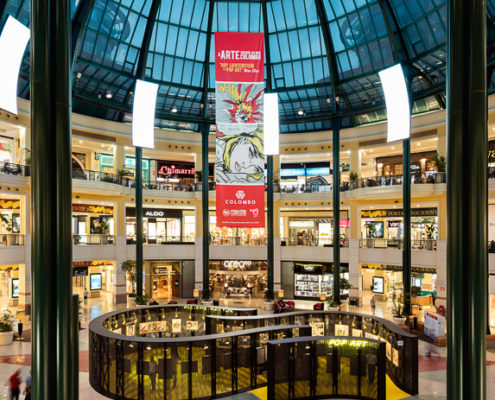 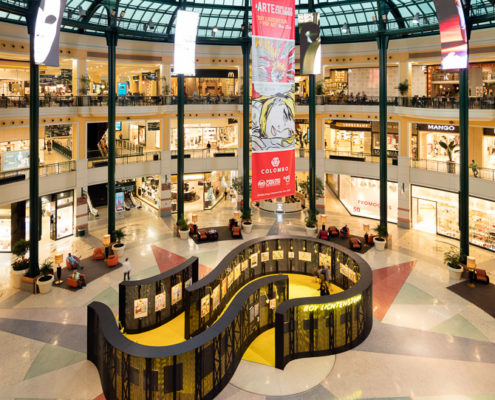 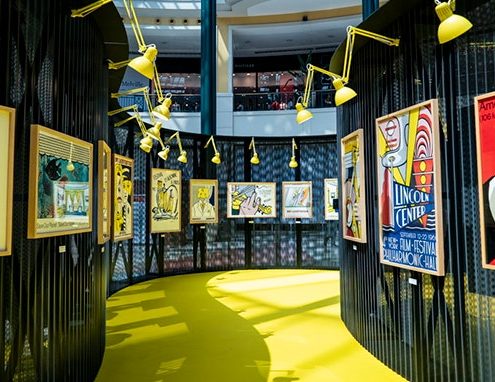 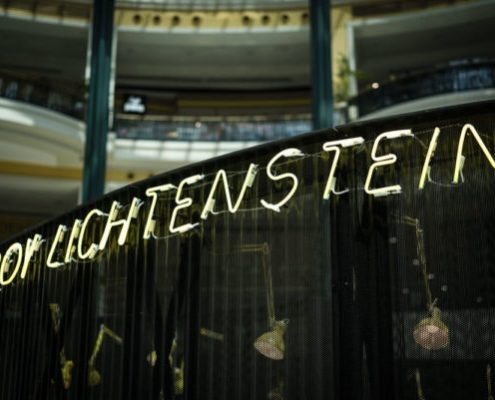 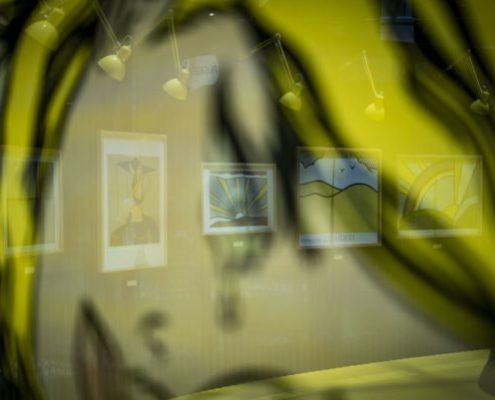 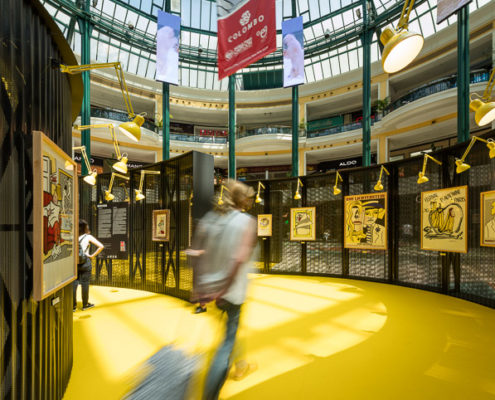