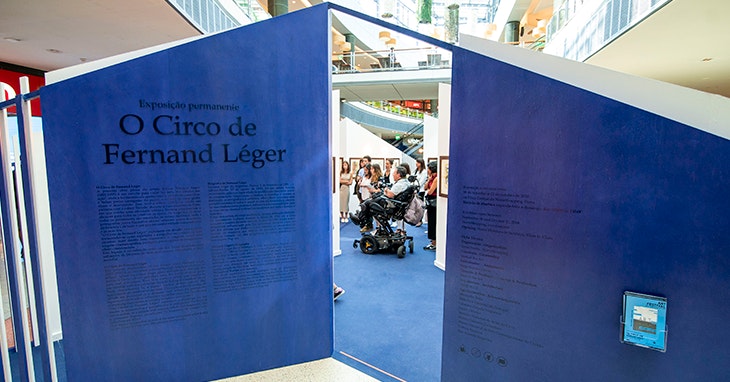 A new exhibition target #ArtEverywhere by ComediArting has opened last Thursday 6 September, in the NorteShopping.
One of the bigger Shopping Center in Portugal. The project is dedicated to the theme of the Circus by Fernand Léger.

The exhibition “The Circus” Fernand Léger is a series of 52 lithographs, original and signed, which are part of the ‘livre d’artiste “, published in 1950, by request of his friend Tériade, publisher and writer very well known in France in theTwentieth Century. A permanent spectacle that brings us into the world of Léger and its evolution in art, whose culminating point is represented by this series.

Adds charm to a setting in the shape of a star and blue and white tones, the structure that houses the exhibition – designed and created by the FAHR021.3 studios – presents an experiential journey in the work of one of the great Artist f the Twentieth Century, that has been able to represent the circus art like no other. An admirer of the art of Léger, was also the former Portuguese secretary of State for Culture, Jorge Barreto Xavier, who spoke at the inauguration.

Because these cookies are strictly necessary to deliver the website, you cannot refuse them without impacting how our site functions. You can block or delete them by changing your browser settings and force blocking all cookies on this website.

If you do not want that we track your visist to our site you can disable tracking in your browser here:

We also use different external services like Google Webfonts, Google Maps and external Video providers. Since these providers may collect personal data like your IP address we allow you to block them here. Please be aware that this might heavily reduce the functionality and appearance of our site. Changes will take effect once you reload the page.