The exhibition Rubens: Ercole e Deianira. Capolavori dalle collezioni italiane curated by Anna Maria Bava, Director of the Sabauda Gallery in Turin, with the cooperation of Cristina Carrillo de Albornoz de Fisac has been promoted by Fondazione Terzo Pilastro – Internazionale and organised by Poema, Comediarting and Arthemisia, under the aegis of the City of Seville.

Two of the most important masterpieces by Peter Paul Rubens, indisputable leader of seventeenth-century Flemish art, have arrived in Spain from Italy:  Hercules in the Garden of the Hesperides and Deianira delivering the fatal tunic to the Fury.  The two large canvases kept in the Sabauda gallery at the Musei Reali in Turin will be exhibited in Palacio de la Condesa de Lebrij in Seville from the 4th of April to the 22nd of September 2019. 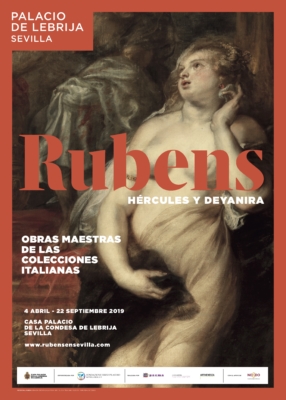 The exhibition is part of a wider project titled ‘Masterpieces from Italian collections’ which from now on will bring several masterpieces belonging to the most important Italian museums to the beautiful setting of the house-museum Palacio de Lebrija, tracing a fil rouge with the precious exhibits kept there.

The exhibition proposes a direct comparison between the artworks from Italy and the mosaics and sculptures belonging to the unique collection of the Sevillian palace.  Hercules and Deianira are the protagonists who engage in dialogue with the mythical figures that populate the mosaics’ decorations, the arabesques in the patio and the classical Greco-Roman marble busts kept in the museum.

Scholar and Humanist with a voracious intellect, Rubens was close to Spain due to his friendship with another great baroque painter, Diego de Velázquez and because he served the courts of Europe including the Spanish court.  His two masterpieces recount two episodes of the stories of Hercules.

In the first imposing canvas the hero is depicted when, having slain the guardian snake Ladon, he picked the golden apples that were kept in the garden of the Hesperides, to perform his eleventh labour.  He leans his right arm on the wooden club that he made to face the first labour to slay the Nemean lion and he is wearing its skin, which together with the club became his main attribute.  Hercules triumphantly crushes the head of the savage snake lying lifeless at his feet, whilst its limb still clasps the club in a last attempt to resist the demigod’s superhuman strength.

In the second majestic painting, Deianira, the wife of Hercules (who looks like Ruben’s second wife, Hélène Fourment), is depicted looking upwards paying attention to the words whispered by the Fury, the snake-haired goddess of vengeance, who leaning towards her offers her the bloody tunic of Nessus the centaur.  Unaware that the blood was poisoned and believing instead that it was a love potion that would help her to win back her husband, who was enamoured with Iole, Deianira subsequently gave the tunic to Hercules, which caused his atrocious death and she committed suicide  out of remorse.

“The Circus” by Fernand Léger in Portugal now!

Stars of Pop Art now in Lisbon!
Scroll to top